The sheer complexity involved in studying the interaction of the human brain with externally applied electric fields on the scalp, aka transcranial electrical stimulation, is fascinating. To get a taste of the complexity I am talking about, let me walk you through the hurdles an electric current faces while it tries to enter the brain from the scalp (physicists don’t frown at me!).

Typically two (active and ground) large conductive rubber electrodes attached to saline soaked sponges will be placed on the area of interest in the scalp. Then small amount of electricity will be passed. 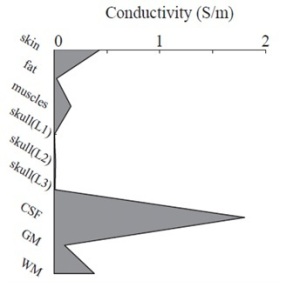 The conductivity profile of each element in the route(scalp to brain) is shown on the left (CSF: Cerebrospinal fluid, GM: Gray Matter, WM: White Matter). All these measures vary from person to person. They also depend on the frequency of current injected. Moreover given the low conductivity and high variability of thickness of the skull, it is extremely difficult to predict accurately how much current is going to hit the brain. Additionally, we must not think of it as a wire diagram electrical circuit. Remember this is 3D. There are analytical and numerical tools to solve for the current densities. But they make assumptions about each hurdle. The most simple ones consist of concentric spheres mainly representing the skull, the cerebrospinal fluid and the brain respectively (Stecker, 2005).

Imagine you have to place the stimulation electrodes over the scalp and predict the current density at the LOS (Lateral occipital sulcus). Now turns out, the location of LOS varies within a few millimeter range among individuals. Now it is theoretically possible that while you are predicting the current for a sulci the real target on hand is a gyri. The way to solve this will be customized electrode placement for each individual subject. Well with infinite funds  it is possible to get rid of some these jitters 🙂

If that wasn’t enough: Welcome to the diverse world of neurons 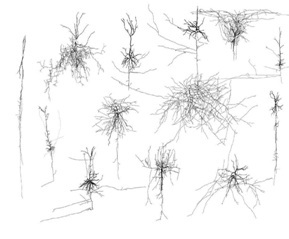 If the variation of tissues en route wasn’t enough, the picture is complicated even further by the diversity of structure and  morphology of the cortical neurons. Each unit is active, with variable conductance as well as differences of orientation between each other. Prediction of what current causes what effect on each neuron is not really like solving a Sudoku. Or is it?

Let’s say by some magic, we can predict exactly what happens to any particular neuron when a 1mA direct current is passed during transcranial direct current stimulation. The next question is, how reliable is our information about human brain areas (let’s just stick to cortical). If we don’t know exactly how an area behaves, how can we manipulate the functions of that area by tDCS. Well at this point, I will say, we should start with a comparatively well explored area (generally visual areas). Then, look to solve the riddle one step at a time.